Oktober 10, 2012
I already said it in [this post], but this bears repeating: I hate running. But before I rant on, allow me to quickly recap what's been going on over the last few days. Since I [hurt my rib] and then [hurt it again], I've been on a reduced training regime. Can't do anything that puts too much stress on my ribcage. Obviously, that imposes rather severe limits on sparring and partner exercise. Hence, I've been working out with shadow-sparring and padwork. Although I love shadow sparring and padwork, I despise being injured. That just plain sucks rocks...


The Past
On monday, I had x 3-minute rounds of shadow sparring. The session looked something like this:
Then, yesterday, I met with [Chris] and [Dietmar] for a padwork session. Basically, everyone just did three 3-minute rounds of padwork plus another three of shadow sparring. This was pretty low-intensity and it showed when I stepped on the scales in the evening and weighed in at 76,5. Obviously, from a recovery point of view it'd probably be the best thing to just stick to some low-intensity cardio to give the ribs a chance to heal. However, on Oct. 26th, I need to be down at -70kg, so keeping training volume low ain't really an option at this time. I hate cutting weight...

For rather obvious reasons, I won't go into great detail at what I did at university - suffice to say that going from place to place isn't my favourite form of active regeneration. If you know Vienna, the following image will give you and overview over the ground I've covered today (not counting the active regeneration session in the evening). 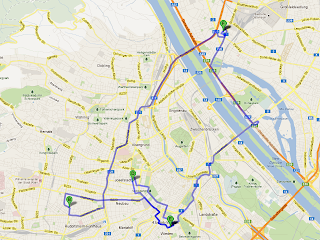 The Intervals
Since Chris and Frank are both sick,  I had to run the 400 meter dashes alone. Didn't exactly help in terms of motivation. Thankfully, [Ronny] was there, so I had some mental back-up. After some light warmup, I did three sprints of about 100 meters (I say about as I didn't really stick to the markers for those. Didn't stop the time, either.) for speed and neural activation.

The session's focus was on lactate tolerance, so I did the 400 meters dash three times, trying to beat my [previous times] on each round. Did pretty well for my standards, as my times were
After the dashes, I immediately did some static stretching for active regeneration. Fatigue management is vital when going for high training volumes...


The S&C session
I skipped the deload weeks after my last few 5/3/1 cycles. Right now, though, it seems like a good idea to do it as it's not that hard on the CNS, yet still intensive enough to deplete glycogen storage. I used 30kg for the snatch and just bodyweight for the pull-ups. What was planned as a light technique practice session turned into something of a nightmare. You see, after going through [this] and [this] articles, I've decided to do a shorter version of the imitation complex. I reduced the original complex down to the following:
Also, after reading [this article], I set time limits: I organized the workout like a kickboxing bout, so five 3-minute rounds with a one minute break in between rounds. During those three minutes, I did the following:
That's it. Sounds easy? Not necessarily... You see, I'm almost ashamed to say it, but after those sprints, even deadlifting those 30kg felt heavy. Of course, the high pull was exponentially harder. After having completed 10 reps already, those last 5 snatches were a lot harder than they ought to be, considering I was tossing around only about 50% of my 1RM.

Interestingly enough, this workout totalled in 100 reps - 25 for each the deadlift, the high pull, the snatch and the pull-up. In [this article], Staley - inventor of the EDT training system - picks up a concept polularized by [Chad Waterbury], the "25-rep sweet spot". I hit those exact 25 reps on every exercise. Now for the deadlift (and possibly the high pull), the weight I used was too light to trigger any serious strength or hypertrophy gains, but then on the other hand, the snatch and pull-up weren't that easy. I've toyed around with complexes in the past, mostly with kettlebells. Actually doing them with a barbell and the olympic lifts feels... interesting. This could definitely be something I revisit and refine after the european championships.

After the session, I hit the sauna for some passive regeneration. Quit after 15 minutes, though - haven't been to the sauna for quite a while now and I feel no urge to collapse two weeks before a fight. Need to work up to a full sauna session again.

Since I'm keen on training again tomorrow, I've added another running session, as a means of active regeneration. Now all of this might seem to be over-regenerative to you on the first glance, but then as I pointed out already, fatigue-management is of the essence.


The Food
For dinner, I had grilled sausage with a some ham and a ton of vegetable. The sausage comes at roughly 1000 calories. Toss in a couple calories for the ham and the veggies and the whole thing totals around 1500 kcal, at most. Now while this might seem a lot for one meal. However, considering this is the only meal I had today, things are put into quite a different perspective...


The lessons learned
While writing this post, I learned that I probably spend too much time reading t-nation articles. Then on the other hand, that stuff really is worth reading, so if you have never been to the site, you should probably give it a shot when you have some time at your hands.

Also, I noticed I hate a lot of things: running, cutting weight, being injured... Doesn't matter, though, as asll of this takes me to doing something I love: competing. Hence, I'll just soldier through all the annoying stuff and reap the rewards in two weeks...

On a side note, I just bought a camera, so I'll probably be putting up visuals on the next sessions.