Februar 15, 2013
Today, after a gruelling marathon T & T* session, Chris and I hit the gym to finish our last [5/3/1] cycle for quite some time. Over the course of the last 9 weeks, we did three such cycles. Since our version of 5/3/1 is [quite a modification] of [the original program], we decided no skip de-load and perform our cycles back-to-back. In retrospective, that probably wasn’t such a good idea. In a [recent T-nation article], Wendler talks about how he has clients perform two 5/3/1 cycles before de-loading. Guess we’ll shoot for something similar, too, when we hit the grinds** again.
Anyhow, the figures and tables below illustrate my strength process during those nine weeks (all weights are given in Kg).


The table reads like this:
For example, this would mean that session 13 called for a 1RM on the deadlift of 150kg, as it was already increased twice, each time by 5Kg (from a starting test result of 140kg). Based on my performance in that day's AMRAP, however, my deadlift 1RM for that day was rather something like 170Kg.

Since I'm the visual guy, I made some diagrams to better illustrate how my H1RM correlated with the A1RM (i.e, the target strength). Watching those diagrams, you'll notice that except for slight deviations, the two variables correlate nicely. In other words, at all times during those 9 weeks, I was probably able to match my strength goals, with little to no reserves left. Now that's what I call sticking to a plan... 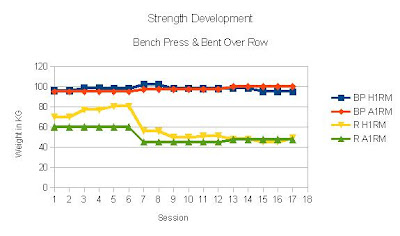 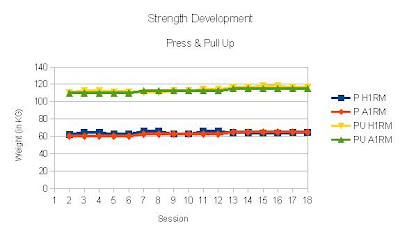 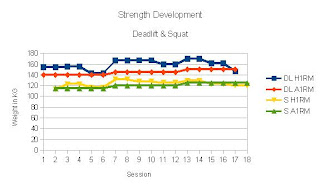 Now we'll be fighting again pretty soon at the [XX Open International Polish TKD Championships], so it's about time to take a step back from the grinds and do something more specific instead. So, for the next 9 - 12 weeks (depending on how often we de-load), we'll devote our gym time to the olympic lifts, namely the clean and the snatch. While the jerk is a nice exercise, I don't feel it's that necessary.

Although we'll do both the clean and the snatch during each session, only one of them will be done with a heavy weight. Also, the heavy set will be done from the hang position, in the 'power' variant (i.e., power clean / power snatch). The second lift will be lighter, but we'll do it in full olympic form (i.e., drop under the weight). This is primarily a means of educating the body to, well, do stuff it's not particularly used to doing.

To keep what we've built over the last nine weeks, we'll toss a single heavy AMRAP set in every week (on one workout, no both), where we'll alternate the squat and the deadlift.

Tomorrow, it'll be sparring, and then some of it. My cousin is on his way back from Italy to Poland,  so maybe - just maybe - he'll join us at the class. In any case, I'll take my camera with me and if there's anyting extraordinarily cool, I'll put it up here.

* Technique & Tactics
** Grinds: High tension techniques such as the [deadlift], [squat] and [bench press], as opposed to explosive lifts such as the the [o-lifts] or most kettlebell lifts
*** As many reps as possible
****As you can see from the stats, we already switched gears after the first cycle and abandoned the bent over barbell row in favor of bent over dumbbell rows