September 15, 2013
Once again, I'm on my train to Linz for another week of instructor training. Just two weeks ago, I've returned from this years training camp. So, there's really plenty of topic I could post on. However, to keep things at least somewhat consistent, I've decided to finish my [Reflections series] first. Alas, here comes

I had some rather amusing moments in China. You see, there's a lot going on when it comes to introducing the english language to the country. I met quite a few westerners who went to China as language teachers - there's just a huge demand for native speakers at the moment. Still, education is one thing - implementation in everday life is something completely different. Some tourist attractions, for example, have already started posting signs in english so that tourists can more easily discover the country. Unfortunately, though, most of those signs are not as good as they could be... Some were just plain wrong in terms of spelling and grammar, while quite a lot were outright useless and misleading. Seems I haven't been the first one to notice that - you should really check out [this page], where some perfect examples for unsuccessfull translation attempts are given. 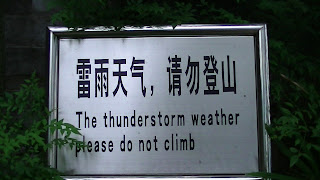 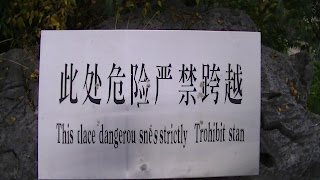 Again, there's an analogy to be observed, especially in the field of the martial arts. Every style has its own terminology and language. If you're in MMA, for example, you've got to know terms such as 'single', 'double', 'guard', 'north-south', 'over-under', 'guillotine', 'jab', 'cross', etc, etc. Without these, you won't get very far. Now that one seems obvious, right? There's another thing with proper language, though, and this is where I'm often not entirely happy with the martial arts. You see, everyone is different, which is a good thing. Everyone's from a different background and took up the martial arts for different reasons. That's also fine, but it can lead to... misunderstandings. 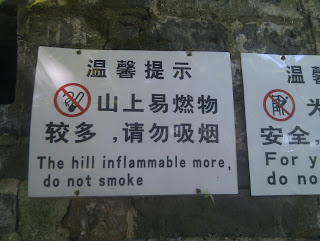 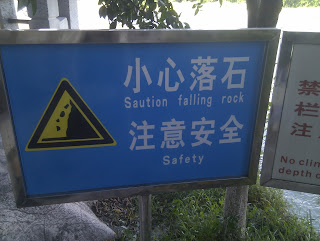 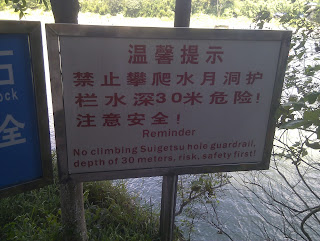 Consider the case when three martial arts instructors talk about punching power. Now the first instructor comes from an esotericism background and argues with terms such as 'Chi' and 'energy flow'. Instructor two comes from an engineering background and brings into play concepts such as 'impulse', 'rotational acceleration' and 'linear velocity'. Finally, the third instructor comes from a reality-based background and talks about 'vital points' and 'timing'. Each of those instructors is probably right, from his point of view. However, each one is using a completely different language describing totally different things. Mixing up those concepts and terminologies will lead to nothing but nonsense. That's like [the tower of babel]. Still, there's no big deal here - as long as the Chinese stick to speaking chinese, other Chinese will understand them, right? Westerners might not, that is, until they learn chinese. Things get troublesome when some Chinese use very, very bad english and use it to communicate, as in the pictures above. Now this isn't to say people shouldn't learn foreign languages, really - as a matter of fact, I did my best to pick up as much Chinese as I could (which unfortunately, wasn't all that much) before departing for China. The thing is that I wouldn't dare to actually instruct people in whatever way using that very limited language skill...

Think about it: when the esotericism-based instructor wants to present his ideas and concepts from another point of view, he might decide to learn some physics. Of course, Newton mechanics and other basics are pretty boring at first, so said instructor choses to devote his time to learning about quantum mechanics. (Of course, this endeavour is bound to fail without a thorough understanding of basic physics...) Then, he starts teaching his students, making heavy use of his newly acquired 'knowledge'. Just like those translated signs in China, most of what he says will be wrong at best and severely misleading in the worst case. All of the resulting confusion might have been avoided by either sticking to the original language and terminology (i.e, esotericism) or properly learning the new one (i.e, engineering/physics) before using it.

Take away message: It pays off to determine a level/language for conversations and stick to that choice. Before trying to meddle with other languages and approaches, be sure to acquire a basic understanding so you don't make a fool out of yourself.