März 30, 2015
So last weekend I took the [FMS] (functional movement screen) certification course. Still need to take the online exam to actually get certified, but I don't believe that'll be much of a big deal. After all, I worked through the book a couple of times and I guess I got most of what Gray and Lee are saying.

In case you've been living under a rock for the last decade, the FMS is a simple screen that aims at establishing a (more or less) objective measure regarding movement quality, a minimal acceptable baseline against which individual can be evaluated and scored. To achieve this goal, a battery of seven simple tests is performed, with each test being scored from zero to three points.

Three points means perfect movement with no compensation whatsoever. Two marks acceptable yet somehow compromised movement. One is dysfunctional movement. Zero is pain. Obviously, a zero would mean referral to a healthcare professional, this is where my job as a trainer ends. As soon as something scores a one (dysfunctional / not painful), this is where the corrective / rehabilitation process begins. The patterns are ranked from primitive to complex, with primitive patterns being of higher priority than more complex ones.

This system gives a clear order of importance and at each time dictates the next logical step. Also, it's a neat indicator of red flags, i.e., it limits the vast pool of existing S&C exercise to those that will benefit but not harm the client. For example, a score of one in shoulder mobility will effectively result in a removal of heavy overhead work, as this will stress other structures (such as the lower back) on an unduly fashion. Also, adding strength to dysfunction is usually a bad idea, as is adding mobility to instability. Lastly, loading a dysfunctional pattern will fortify that pattern and take away correction opportunities.

The beauty of the FMS further reveals itself in the fact that all of it is done in fifteen minutes or less. This makes it ideal for an athletic setting, which differs from a health club / personal training setting in that a large group of people has to be handled efficiently. Even for PT, having a screen in place eliminates a lot of guesswork and on-the-fly adaptation of programs. If you know me, you know I like to do things methodically and in a structured manner. Improvisation is fine (in fact, that's the essence of fighting), but [proper preparation prevents poor performance], and there will be enough room for improvisation left anyway - no need to make things harder by failing to acquire enough data for planning.

Having said that, I need to stress that that is exactly what the FMS is: a screen, a way to collect some data up front. Nothing more. There is no magic to the FMS. Also, it's not a diagnostic tool - the FMS will tell you if there's a problem. It will not (by itself) give you information on what that problem is and where it comes from. There are other systems (such as the [SFMA]) that will yield this information. Of course, you can always follow up with some differential tests or just attack the problem with some arbitrary corrective and see what it does. Still, this is what you make of the screen result - it's not part of the screen itself.

The course was led by [Eberhard Schlömmer], sport scientist and spokesman of [perform better]. Eberhard is quite knowledgeable and you can tell that he brings a lot of experience with him. Also, he exhibits the kind of clear, analytical, structured thinking that is at the base of the FMS - the kind of thinking that got me interested in the system in the first place, since it suits my technical education and scientific background well. At the same time, Eberhard is down to earth and pragmatic, traits that I believe to be of vital importance to successful trainers (and people, in general). Unlike many trainers that seem to follow their system religiously within narrow confines, Eberhard exhibits a whatever-works attitude. I believe there would have been much more to learn from that man if the study of [movement] and some anatomy training was a prerequisite for taking the course. All of that is not exactly necessary for the use of the FMS, as the screen is pretty straight-forward (another benefit here - the simpler it is, the better it will perform under less-than-optimal circumstances). The corrective exercise we dealt with, however, is partly based on some pretty interesting science. I would have enjoyed it greatly to cover some of those topics in greater detail. Also, I'm quite sure Eberhard is more than able to elaborate on these topics. Pity this type of in-depth discussion was outside of the courses scope. Accompanying Eberhard was [Mag. Daniel Müllner], a Vienna based personal trainer.

All in all, I was definitely satisfied with the course and looking forward to using the FMS in practice. If you happen to [train with me], this could mean you'll be going through the screen pretty soon. 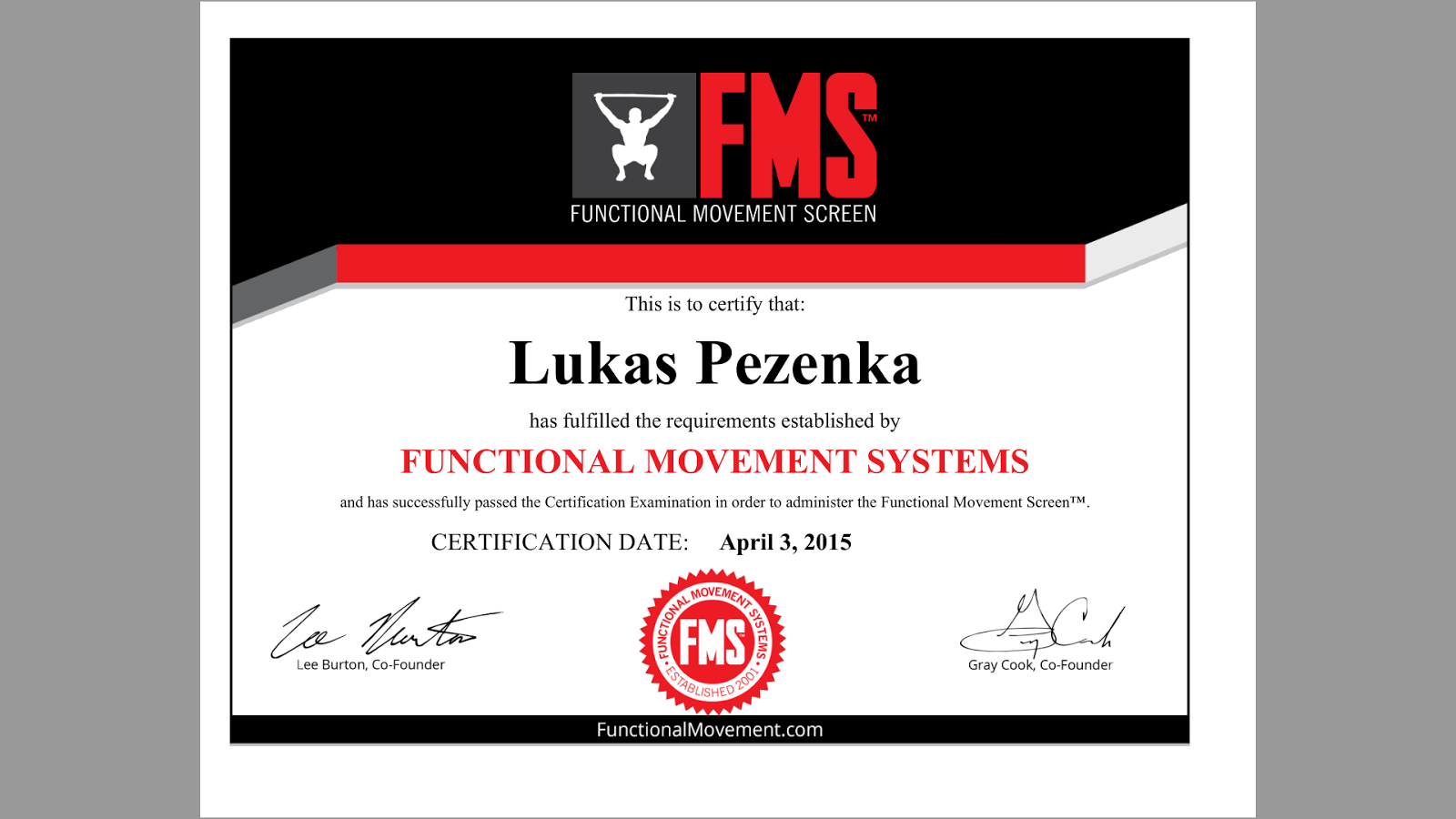