Failing to prepare is preparing to fail

Everybody has a plan 'till they get punched in the mouth

The above cites nicely illustrate a dilemma when it comes to S&C training (and Probably just about anything in life, but I'll try and stay on-topic here):

On the one hand, you simply need a plan. Not having one will inevitably result in chaos.in the best case, your progress will stall. In the worst case, you get hurt. That's why there's a plethora of books on proper periodization and exercise programing.

On the other hand, nobody operates in lab conditions. Factors like sleep, nutrition, stress at work and concurrent sport specific training need to be taken into consideration. Trying to PR int he deadlift  the day after a hard sparring session or an spontaneous party night isn't a good idea. Now there's always an argument to be made here that while the latter case (the party) can be attributed to a weak will and low discipline - partying just isn't an option during an overreaching phase -,  the former case (i.e., the hard sparring session before a PR day) just boils down to bad programming. However, especially in the amateur world and in group class settings, the sports coach will not always consider (or even know) every athlete's S&C regime. Also, while the two presented examples are very obvious ones, there's a lot which are far more subtle. Hence, things like fatigue levels need to be monitored, assessed and considered for decision making on a day to day base. I didn't make this up, either - several training readiness measures such as the high jump, broad jump, grip strength or heart rate variability are and have been used for a long time in pro athletics. There's even apps that will measure tapping frequency and derive the CNS status [14].

In the Shinergy Athletics class, we basically rotate between a squat, a hinge and a (semi)unilateral pattern such as the lunge or step up on an 8-week base. This way, every pattern is trained hard twice a year. Beginning on Mai 1st, we'll be deadlifting again.

Of course, we have our assessment pipeline in place to evaluate who qualifies for heavy pulling and who doesn't. Also, we're not pushing beyond the point of diminishing returns - once an athlete can pull around 2.5 times his bodyweight, we'll put him on something like single leg deadlifts, where sagittal plane strength isn't the limiting factor. After all, in an athletic context, it rarely is.
Also, there's no point in coming up with any fancy programing for weak athletes. For me, that'd be anything below 1.5 times bodyweight. For those athletes, it's really all about showing up and getting quality reps in the 5-ish range. There's nothing magical about that number, but it appears to be working pretty well. For one, the load is sufficiently heavy to elicit strength gains. On the other hand, most people can stay focused for that half minute and pull with proper form. Just sticking to proper form can go a long way in terms of injury prevention. Keep in mind that the Shinergy Athletics classes are pretty much all about injury prevention for active athletes, but I digress. Might do a separate post on the whole notion.

Now after excluding sufficiently strong athletes on the one hand and really weak athletes (not meant to be dismissive - just a quantification. Someone else might fobs a more politically correct term for "weak"), that leaves the middle ground. Now we're looking at athletes that are stuck somewhere between 1.5 and 2.5 times bodyweight in their pull. It's those athletes that can definitely benefit from a periodization scheme that is a bit more sophisticated than "show up and pull heavy stuff". Not much more sophisticated, but still enough to accelerate strength gains.

Personally, I like Coach Dos Remedios concept of "alternating linear"[1][2] (which basically is an implementation block-periodization) very much. In a nutshell, alternating linear alternates (hence the name) between hypertrophy oriented periods and power oriented periods. A 9-week sample could look something like this (bold lines indicate a power block while regular lines denote a hypertrophy block): 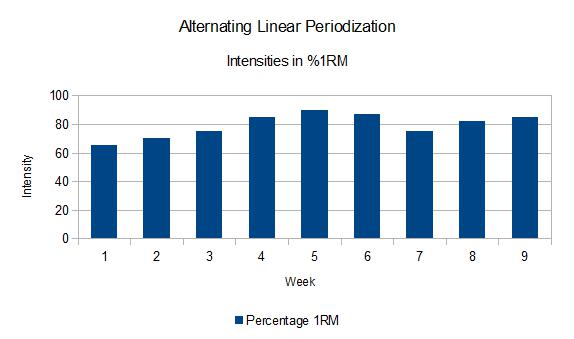 I'll do a separate post on this one in a squatting context. What keeps me from using it for deadlifts is the fact that, as mentioned above, I like to keep sets on the DL rather short (<= 5 reps). Going to that 8-12 rep hypertrophy range might work out with lighter stuff, say Kettlebell deadlifts or trap bar deadlifts (due to the higher quad involvement), but for straight bar pulls from the ground, it's not worth the risk. Disagree? Fine, have it your way then - but this is how we do it.

Likewise, I'm not really interested in having my athletes pull singles at their 1RM  (if the terminology confuses you, you might want to skip this post, sorry ). While some coaches argue that a 1RM pull holds no added risk when compared to a 5RM  (mostly due to fatigue-induced form breakdown, as mentioned above), I disagree. The difference between a 90% 1RM pull and a 1RM pull is huge, not only on terms of injury risk but also when it comes to recuperation time. Keep in mind that my athletes are not power lifters or weight lifters - the program is geared towards fighters, soccer players and the like. I want them to train, get stronger and be fit to do their sport specific stuff the next day.

Having said all the above, let's take a look at the solution : enter cybernetic linear periodization.

Now as mentioned above, we don't operate under lab conidtions - hence, sticking to percentage - based training probably isn't quite feasible in a setting where competing demands (such as general training vs sport specific training) come into play.

Basically, we'd follow a very basic 9-week linear periodization scheme that starts at around 5 reps. 5 reps would be something around 86% 1RM, depending on which equation you use [9]. There, we'd stick for around 3 weeks before progressing to 4 reps. Theoretically, we're moving in the 87%-90% range here. After another three weeks, we'd switch to 3 reps (90% - 93%), which is about as low as we go. Now the big thing here is that we're staying in the same range for three weeks, which is six to nine workouts. On a sidenote, with athletes who choose to get three weekly sessions in, we'd use something more similar to the Texas Method[10][11]. Again, there might/will be a separate post on that one.

In every workout, the athlete would record his/her training readiness before the session and RPE[12][13] score after each set. To keep things simple, we use a ten-point-scale as opposed to twenty points. The goal here is to hit an RPE of around 9/10. This means that another rep could certainly be done, but probably not two. Now, all of a sudden, five reps are not five reps anymore. Consider the following scenario:

The below chart illustrates the concept. Loads for every set are chosen depending on the RPE of the previous set. If the previous set was in the previous session, also consider training readiness. Make a crude estimation and re-evaluate from set to set. In the chart, this means that intra-workout load increases are made when the red bar is low. Conversely, inter-workout loads are increased when the yellow bar is higher than the last time. Simple as that. As you can see with the blue line on top of the bars, while the load increases are not linear, the trend is definitely an increased load over time. 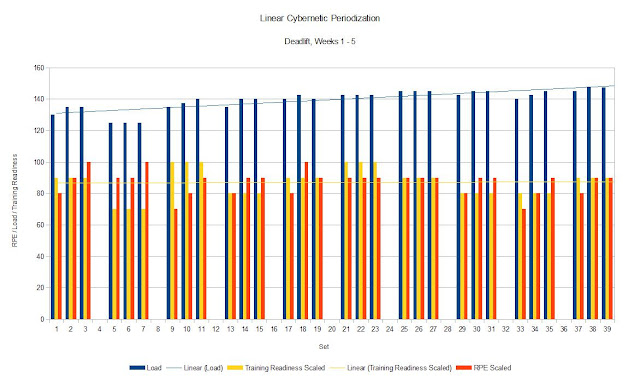 Now while this approach certainly isn't rocket-science, it is robust, auto-regulatory to some point and still follows a plan. As always, I take every right to change my mind the instant I find a better way to do things. Until then, cybernetic linear it is.If you want to give it a try, make sure to share your experiences in the comments.